Brave participants faced their fears when they got hands-on with spiders during DZG’s Arachnophobia Workshops. 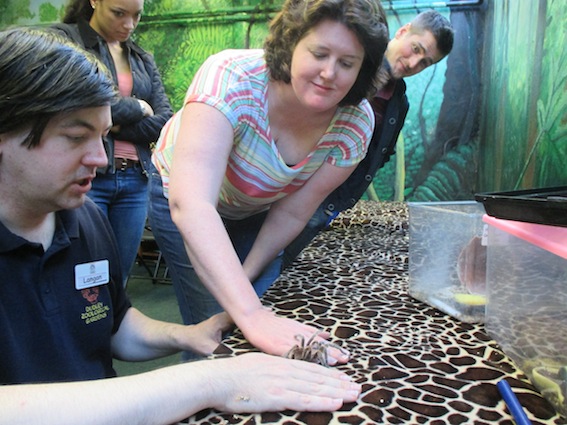 Anne McClean gets hands-on with a tarantula

During the session, which was led by DZG Presenter Langan Turner, the group took part in informal discussions about the eight-legged creatures, before they were encouraged to touch Matty, Chili and Karac, the Discovery Centre’s tarantulas.

Langan said: “The session went very well and I think everyone genuinely got something from it and the majority were all able to touch a real spider by the end of the workshop, which was a huge achievement.” 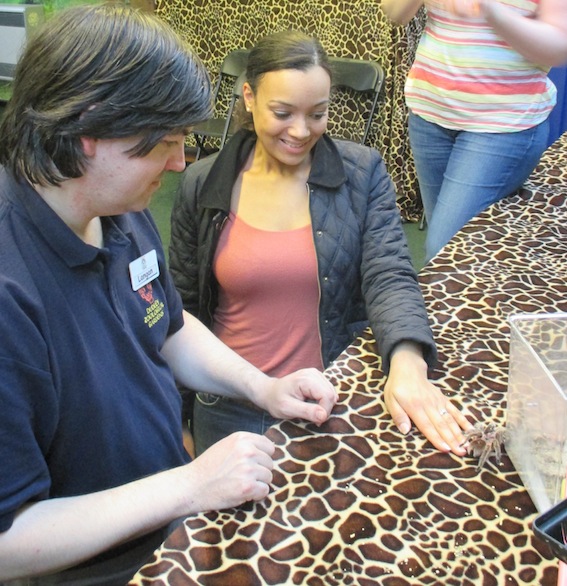 Langan also used the workshop to try and dispel the myths surrounding the false widow spider.

He added: “Some of the group said they were taking part specifically because they had heard all the stories in the press about false widows  so I used the opportunity to try and address the scaremongering stories and headlines surrounding them.”

Participants were also able to take away information handouts which contained information from the session, as well as tips and coping methods when dealing with spiders at home.

Anne McClean, from London, travelled to DZG specifically to take part in the workshop, after being scared of spiders since she was a child.

She said: “I found it really useful and it taught me a lot of things that I didn’t know about spiders.

“I have a baby boy and I didn’t want to pass on my fear to him; I wanted to get to a point where I wasn’t having to worry about them and that they weren’t going to try and get at me.

“The session was put to the test as soon as I got home, after I discovered a spider in my bathroom and bedroom, but whereas I would usually get someone to remove them, I just let them stay put.

“It was excellent value for money and I would definitely recommend it to other people.”