DZG’s presenters have taken delivery of a new replica sword for use in their school workshops. 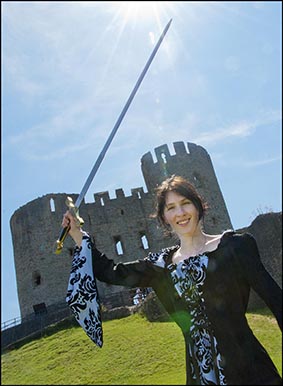 The longsword, with its stainless steel blade and a leather wrapped handle, will be used in the Knight School and Horrible History sessions, after the previous sword broke.

Presenter Langan Turner, said: “We wanted to make sure the new sword would be as authentic as possible so the participating school children are able to get a real idea of the era and the swords uses and this definitely looks the part.”

The weapon, also known as an Excalibur Sword would have been typically used in battle from 1250 to 1550 in four specific ways  to stab, slash, punch and hit  and are all described by the presenters during the workshops

The new sword, which has a dragon detailed pommel and guard, will also be used for special coronation and knighting honours in 11th century castle courtyard.

Presenter Caroline Howard with the new longsword that will be used in Knight School and Horrible History sessions, plus courtyard coronations.

THE SWORD WILL BE USED FOR OUR NEXT CORONATION ON FRIDAY, AUGUST 23 WHEN 13-YEAR-OLD MAARIYAH IQBAL IS CROWNED PRINCESS FOR A DAY IN THE COURTYARD OF 11TH CENTURY DUDLEY CASTLE AT THE HEART OF THE ZOOLOGICAL GARDENS!

Presentation Assistant, Amy Hickman, has stumbled upon further evidence about one of Dudley Castle’s most famous ghosts.

Amy has been researching ithe 11th century castle’s history and discovered letters between Sir William Brereton  a commande rin the Parliamentary army in the English Civil War and Colonel Thomas Leveson  Governor of Dudley Castle, which reveal there were two drummer boys killed on the same day in 1645, instead of the known one.

The ghost of the drummer boy is believed to be found near the Warden’s Tower  the Tudor archway by the Reptile House and can allegedly be heard banging his drum at night as if in battle.

Amy said: “The letters confirm there was definitely a drummer boy shot in action, but we never realised there were two killed on the same day, so there could potentially be two drummer boy ghosts here at DZG, which is very exciting for us.

“I’ve never actually heard anything myself, although I did think I heard him once until I realised the banging noise was actually coming from a party at the nearby Fellows pub, but I’ll be listening out for two now!”

DZG’s presenters host ghost walks around the site every day with the meeting place in the castle courtyard at 4pm Monday  Friday or 4.15pm Saturday  Sunday.

For further information about evening ghost walks, which include Dudley Castle, The Station Hotel and some of the most haunted locations in the town centre, visit www.dudleyzoo.org.uk/events-and-experiences/ghost-walks

Previous: Camel post is up to scratch
Next: Visitors aplenty at Tipton Family Fun Day