Eight trainee Zoo Keepers from around the UK are well on their way to achieving their goals, after sitting their end of year exam here at DZG.

The students from Twycross Zoo, Woburn Safari Park, West Midlands Safari Park and DZG’s Jo Turner, sat their first national test as part of the Diploma in the Management of Zoo and Aquarium Animals in the Safari Room in the Discovery Centre. 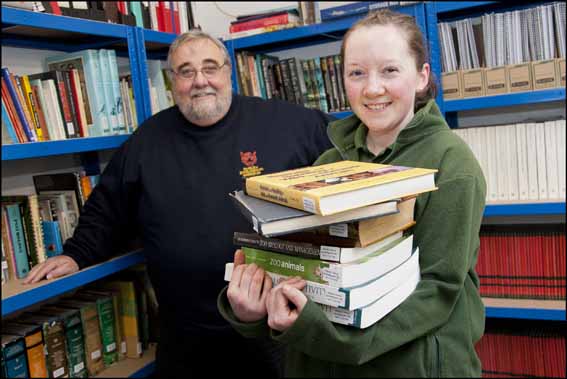 Trainee Keeper Jo Turner revises for the Diploma in the Management of Zoo and Aquarium Animals exam with DZG’s Registrar and Research Co-ordinator, Dr David Beeston.

DZG Registrar and Research Co-ordinator, Dr David Beeston, who is also the Regional Co-ordinator for the course, said: “The exam, which consists of two two-hour papers tests the students on everything they have been studying over the last year, which includes zoo history, conservation, research, animal health and welfare as well as zoo design.

“Trainees have to be very dedicated during the course, as they have to study in virtual classrooms as well as carrying on with their daily hands-on work duties. It’s certainly not easy.”

If the students pass the first part of the programme they can then continue for another year before sitting their finals in 12 months time.

Meanwhile two more DZG keepers are getting ready to follow in Jo’s footsteps.

Upper Primate keeper, Stephanie Sawyer and part-time keeper Sally Skinner will begin the two-year diploma in the next few weeks.

Dr Beeston, added: “We take the training of our staff very seriously and are always keen in supporting them in gaining the DMZAA. We wish Steph and Sally well.”