A bag of cuddly toy orang utans and a lifesize cardboard cut out of Charles Darwin helped get the message of evolution across to a class of young school pupils. 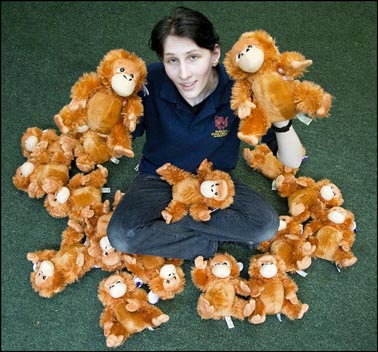 Presenter Caroline Howard used the soft toys to captivate the youngsters’ imaginations and help explain the origins of evolutionary theory and genetic drift, as well as teaching about animal habitats and adaptations.

During the session with a class of year seven children, Caroline also used made-up mimes and delved into the realms of fantasy when describing genetic mutations by giving the orangs the ability to protect their rainforests with the help of laser eyes!

Caroline explained: “Evolution and genetic mutation can be quite complex so I decided to use the toy orangs to help the children fully engage with what I was saying and they were really keen to join in with the cuddly orang utan fun.”

The evolution workshop is just one of a number of sessions run by our team of education presenters.