Baby Brazilian tapir, Eve, has lost most of her distinctive spots and stripes. 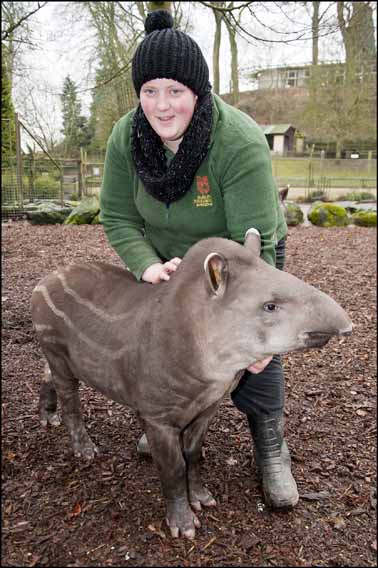 The six month-old is now hardly recognisable from early photographs with her vivid camouflage pattern.

Keeper, Sarah Evans, said: “Tapirs moult out their stripes and spots by the time they get to six months, although they all keep a little fragment of their markings, like Eve’s big brother Ronnie, who still has stripes on his feet at three years of age.”

Tapir babies are born with the bright markings as camouflage against predators. Older tapirs are able to run into water and stay submerged until any danger has passed, but babies are left on land camouflaged against the rainforest foliage.

LEFT: No spots on me! Eve with keeper Sarah Evans.