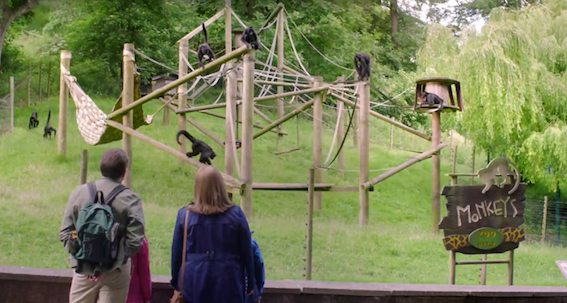 A screenshot of the advert shows a few additional primates at DZG!

Media and Communications Officer, Rachel Hickman, said: “It was great to be able to welcome the cast and crew to DZG back in June to film the advert, who were impressed with the spider monkey enclosure and its location and backdrop. It was really interesting to see how much work went into putting the ten second advert together.

“Our four spider monkeys loved all the attention and were impeccably behaved throughout filming and it even looks like they have some extra digitally added friends in the final version too!”

Following the half-day shoot, the crew left us the specially made wooden animal sign shown in the advert, which we’ll soon be putting to good use on site.

A screenshot shows the stars of the advert, TV’s Ruth Jones and Ben Miller

The advert promotes Tesco’s Clubcard Summer of Partners campaign and is one of three adverts which showcases the different activities families can enjoy over the holidays as part of the supermarket’s reward initiative.

Previous: Gardeners work their magic!
Next: Sad news about Cleo