Eight-year-old Ely has joined the black-and-white-ruffed lads in the one-acre walkthrough, after relocating from Birmingham Wildlife Conservation Park. 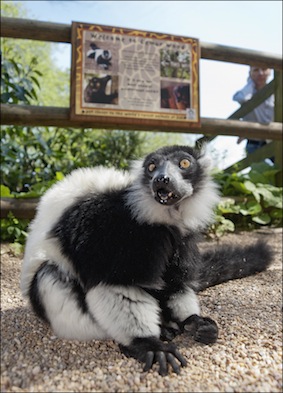 Upper Primates Section Leader, Pat Stevens, said: “We had a challenge trying to settle Ely in with the rest of the black-and-white group to begin with, but they’ve now accepted him and they’re all out together now eagerly awaiting visitors to greet!”

To prevent any fighting between the boys, keepers had to gradually introduce Ely to the wood’s residents and paired him with Zeb, who were then kept separately from the others for his first few weeks.

Pat added: “So that Ely wasn’t excluded by the group, we made sure he had a friend and ally and picked Zeb to introduce him too.

“The pair hit it off immediately and we let them explore the wood on alternate days to the rest of the black-and-whites until we felt it was the right time to put them all together.

“Luckily all went well and once we introduced them all again, they quickly welcomed him as one of the gang.

“He’s a very gentle lemur who loves a fuss and he’s quickly worked out that keeper for the day visitors usually mean a food treat for the lemurs, so he likes making friends with them!”