Six Indian blue peafowl have found themselves an electric blanket’ to take the chill off winter nights. 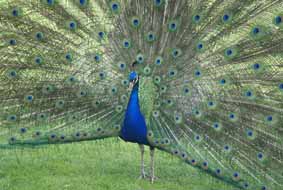 Four males and two females have taken to roosting on top of the Queen Mary restaurant which becomes a toasty resting place when the temperature drops, the heating kicks in and the roof warms up.

Curator Matt Lewis said every autumn the peafowl roost in a beech tree near the zoo’s Discovery Centre, but as the weather gets colder, they move to the restaurant roof and stay there until the lighter nights arrive.

The peafowl wander freely around the zoo and castle grounds.

Previous: Arty thanks from Penn Den
Next: Stafford College visit