We held a special guided tour for former head of section Eileen Skinner after unearthing her old keepers’ diary from 50 years-ago. 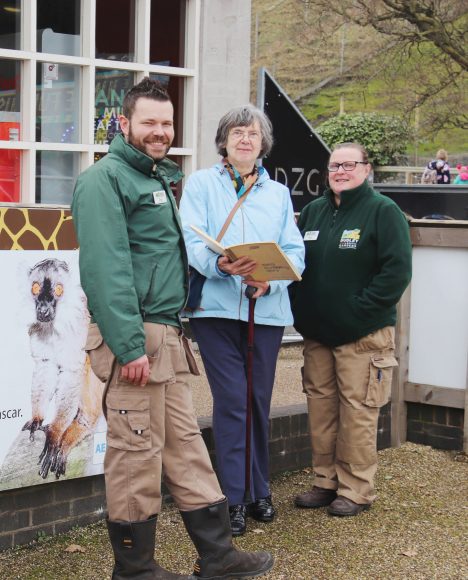 The diary was discovered when staff began building the binturong enclosure last year and featured Eileen’s handwritten records about the 1969 ungulate section.

And current head of ungulates, Assistant Curator Jay Haywood, who started work on Eileen’s section in 1999, was on hand to give her the VIP visit alongside Upper Primates Section Leader Pat Stevens, who also worked alongside her.

Jay said: “It was lovely to see Eileen again and show her all the changes, of which there’s been a lot since she left and it was great to hear all her stories as we walked around the zoo site.

“She was wonderful to work with as she had such vast knowledge and experience as she’d worked here for over 30 years.”

Eileen began working at the zoo in 1968 in Pets Corner, after fancying a change from her office job and retired in 2000.

Eileen from West Bromwich, said: “I remember the first month was horrific, but then I began to really enjoy it – I must have done as I stopped for 32 years.

“It was lovely coming back and seeing quite a few faces I still recognised. The basics of the zoo are still the same, but there have been lots of changes for the better which is wonderful to see and it was great to hear about the rolling programme of developments and all the new ideas.

“I can’t wait to come back and visit, as I’m especially looking forward to seeing brown bears return to the zoo.”