Our eight reindeer girls are shedding their antlers – but this year it’s happening just a bit earlier than normal. 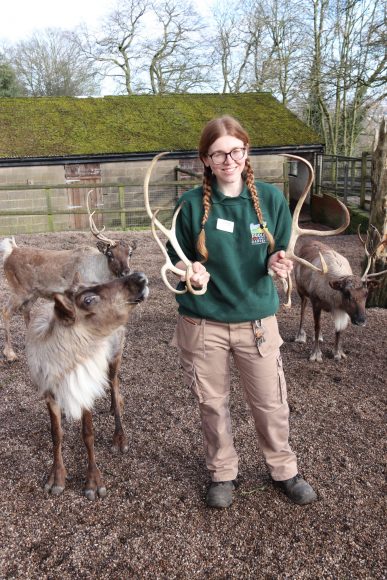 And Assistant Curator Jay Haywood said it’s all because we don’t have any pregnancies in the female-only herd at this time.

Jay said: “Males of almost all deer species grow antlers, but only female reindeer grow them too.

“Antlers make females more dominate over other reindeer and they would use them in the wild specifically for searching for food under snow while they were pregnant.

“We typically expect our girls to drop their antlers in late spring early summer after they would have given birth in May time, but because we haven’t got any pregnant females at this time, as we haven’t got any males, they’re dropping them now.”

The whole shedding process takes between two to three weeks, but the antlers will both drop off within a few hours of each other.

We use the shed reindeer antlers as enrichment for our rodent species – as it’s great for their teeth, as well as using them in educational workshops.

However, it won’t be long before the girls get new headgear as the antlers will soon begin to re-grow from an attachment point on the skull called a pedicle and they’ll come back larger each year – potentially reaching up to 50cm long.

As they grow, skin, blood vessels and soft fur, known as velvet cover the developing soft antlers, protecting them until they mineralise and harden. Once fully grown, the velvet dries up and drops off to reveal the toughened bone underneath, before the cycle begins all over again!

STOP PRESS: We’re awaiting the arrival of a new male reindeer in time for this year’s breeding season, so expect the pitter patter of tiny hooves next spring!

Previous: Your guide to DZG!
Next: Flying squad stunners!