Hundreds of visitors joined DZG’s royal celebrations with our very own Will and Kate. 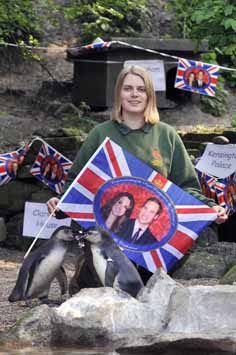 In honour of the Royal Wedding DZG?named two rare Humboldt penguins William and Kate.   The tiny two were hand reared by dedicated keepers after being rejected by their mums during autumn’s cold snap. Since November they have made steady progress in the aviary nursery before gradually being introduced into the main group  DZG’s colony of 60-plus parent-reared Humboldts is the largest in the UK.   CEO Peter Suddock said:?”We were thinking of names for the youngsters when the royal announcement was made so we called them William and Kate to mark the occasion.   “Dudley Zoo incorporates the 11th century Dudley Castle which has strong royal connections; Queen Elizabeths I and II have both visited and several dukes and earls have strong ties with the site, so we felt it fitting to send Prince William and Kate an adoption pack for their namesakes and wish them well for a long and very happy future.” 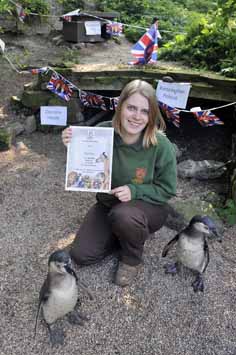 He added:?”We’re not quite sure where they will settle once they are fully integrated in the penguin enclosure, so just for fun we have labelled the nesting boxes Clarence House, Buckingham Palace, St James’s Palace and Kensington Palace, to give them a fairly regal choice for their first home.”   Visitors to the site were also able to watch the big event on a large screen in the Discovery Centre and youngsters had the chance to be princes and princesses for the day with special crowns to commemorate the occasion.   Mr Suddock added:?”The big screen relayed the wedding celebrations throughout the day, and keeping staff took it in turns across the various animal sections to watch the event.”

CAPTIONS: Humboldt penguins Will and Kate enjoy their big day at DZG – with a little help from keeper Sophie Dugmore. 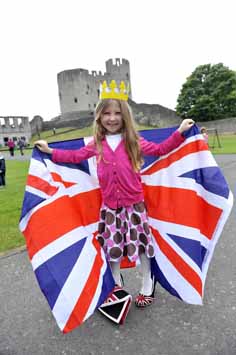 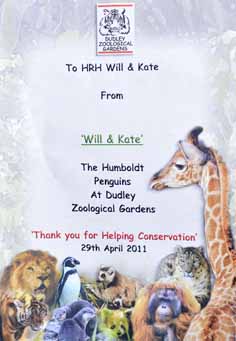 Princess for a day:?Six-year-old Millie Villiers-Cundy, of Edgbaston, in patriotic party mood.

Orang utan Jerong uses his flag as a napkin. 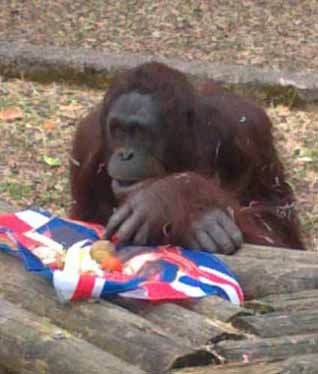