Proceeds from our 2011 calendar, which features Dudley Zoo’s animals with their favourite Best of British foods, has been split between DZG’s Madagascar Campaign, to support lemurs in the wild, and Help for Heroes. 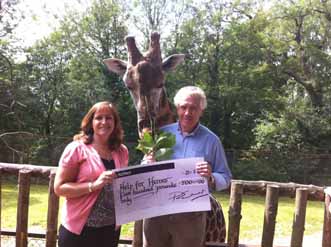 DZG CEO Peter Suddock, said: “It is the first year we have supported Help for Heroes, but with the calendar’s Best of British themes, we thought it a fitting and very deserving cause.”

Help for Heroes Volunteer Local Co-ordinator (Worcs), Anne Darlaston, who received the cheque said:?”It’s very kind of Dudley Zoo to think of us and the cheque is much appreciated.

“It’s certainly one of our most unusual donations!”

Previous: Pupils learn about conservation
Next: Cute, but so very noisy