Keepers have raided the first aid kit in Lemur Wood in a bid to raise funds for Birmingham Children’s Hospital. 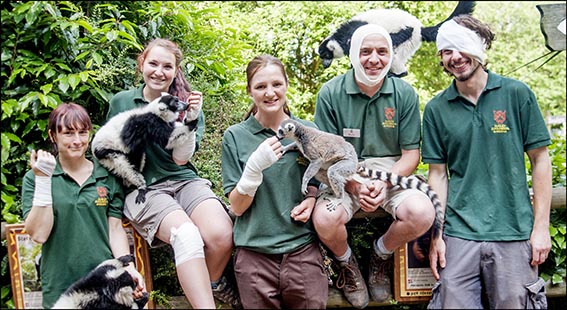 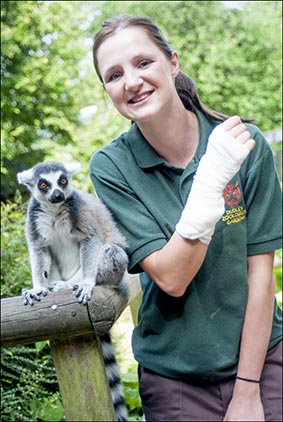 More than a dozen keeping staff have joined BCH’s Big Bandage campaign to raise £4million for a Children’s Cancer Centre and hope their efforts remain under wraps throughout the July 11 event.   The fund-raiser is particularly poignant for primate keeper, Stacey Ball, pictured right, whose two-year-old daughter, Lily spent the first two months of her life on the hospital’s wards.   Head of Media and Communications, Jill Hitchman said: “Lily was born with her bowels outside her body and had to undergo quite a serious and lengthy operation soon after birth.   “DZG is a close-knit workforce and we all shared Stacey’s concern when Lily was admitted, but that quickly grew to admiration for the staff and their work with youngsters as she grew stronger and was able to go home.    “Stacey has remained in touch with nurses through Lily’s check-ups and is always blown away by the work they do.”   She added: “We are immensely lucky to have such a world class hospital on our doorstep; when we learned about Big Bandage staff were keen to help raise funds, so we’ll all be joining in on July 11.” 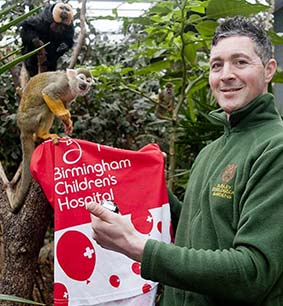 The Big Bandage challenge strengthens links between the zoo and hospital  DZG?Construction Supervisor, Carlo Diponio regularly trains across our hillside site for sponsored runs to raise funds for BCH where his eight-year-old son, Leonardo is receiving treatment for leukaemia.