And some lucky local folk and the media will get a sneak peak of the one-off drama tonight when the Dudley-born funnyman, pictured above with his fellow actors, returns to his hometown.

Written by and starring Lenny, Danny and The Human Zoo is a fictionalised account of his life as a talented teenager growing up in 1970’s Dudley and follows his rise to fame. 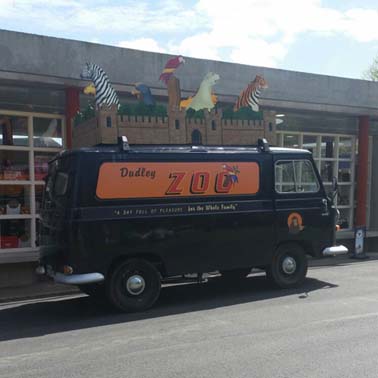 Some of the drama was filmed at DZG, focusing on the former Queen Mary Ballroom – now our Oak Kitchen at the Queen Mary Restaurant – where Lenny’s comedy career began.

Lenny, who started out with weekly stand-up slots in the Queen Mary, also worked as a barman in the Safari Night Club in the early 1970s.

CAPTION:? A replica of a vintage Dudley Zoo van the BBC created and brought on site during filming

Zoo Director Derek Grove said: “We were delighted to have the crew and some of the actors on site to film the venue which provided a springboard for Lenny’s impressive career.

“It’s fantastic to be part of a peak time drama focusing on the region and a Dudley-born star who made it big.”

The drama is due to be screened on BBC One this autumn, but Dudley residents picked out in a special draw will be able to enjoy a preview being shown at the Showcase Cinema in Castlegate tonight.

Lenny Henry stars alongside Kascion Franklin and both will be attending the preview with director Destiny Ekaragha.

Made by RED Production Company for BBC One, the story centres round Danny Fearon, a talented impressionist, and his working-class Jamaican family, as he rises to fame as a stand-up comedian.

Lenny Henry says: “I’m so excited about bringing my fictional teen memoir to the nation!

“I’ve crammed the first two years of a very long career into 90 minutes – it’s gonna rock! I think, although it’s not exactly what happened, that we’ll get a strong sense of what it might have been like for a young black kid from Dudley to be suddenly hurled into the maelstrom of this business we call show… Can’t wait!” 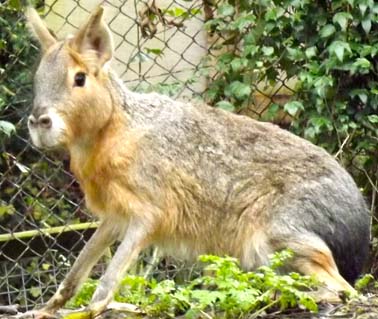 This isn’t the first time Lenny has worked with us!

He made Lenny Henry’s First Love life story here and recently provided the voiceover for Animal Architecture, a short 1950s-style film, made by renowned artist and writer Adam Kossoff, about the relationship between visitors, animals and buildings at Dudley Zoological Gardens.

Lenny’s even got an animal named after him!

Just as the Animal Architecture voiceover was completed this January, a two-year-old Patagonian mara (pictured right) joined us from Colchester to form a new breeding group and was named Lenny in his honour.

And our Lenny recently became a proud dad when little male mara Lucas was born on June 23.

Danny and the Human Zoo will be broadcast on Monday August 31 at 9pm on BBC One. Keep your eyes peeled for the shots of DZG!