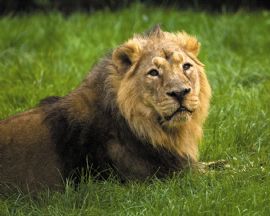 The four-part science documentary, which offered a fascinating insight into some of the world’s rarest species, saw a double big cat post mortem carried out on Max, alongside a tiger, at the Royal Veterinary College (RVC), University of London.

DZG CEO Peter Suddock said: “Max was an important male in the Asiatic lion gene pool and was taken to RVC for the purpose of post-mortem examinations, following his death from natural causes, which allowed veterinary surgeons to study his anatomy in detail.

“The event also provided RVC students with a unique experience in being able to witness the post mortem of a large wild animal – and that’s a very rare opportunity.”

“Here at Dudley Zoo we are very proud that we have been part of such an important series that highlights such a diverse range of animal anatomies, and this can only reinforce our education and research.”