A surprise birthday gift is set to link an American rector to Dudley Zoological Gardens via his family name.

DZG Visitor Services Manager, Adrian Pace, received a telephone call from Geoffrey Styles in Tallahassee, Florida, asking for DZG branded items for his local rector, who goes by the name of Eric Dudley,

Adrian said: “Mr Styles explained his Anglican Church rector was called Reverend Eric Dudley and asked for any merchandise we have with the word Dudley on it for his birthday later this month. It was certainly an unusual request but we were very happy to oblige.” 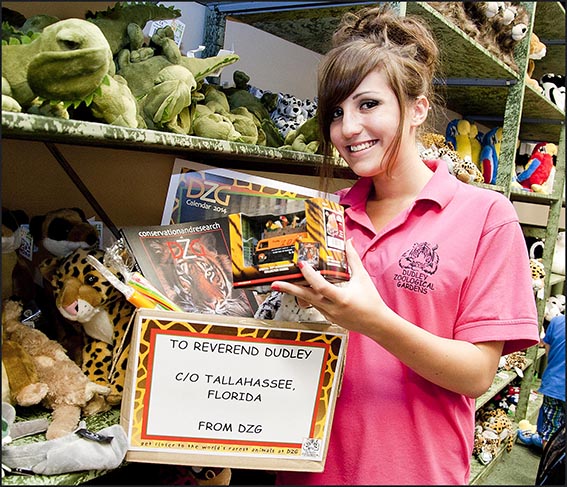 Staff rose to the challenge and Retail Assistant Kelly Hanley, pictured above, posted a parcel containing a 2014 DZG calendar, a die-cast model of a zoo van and DZG book Towers and Tectons, as well as a few extra Teddy Gray’s rock treats and DZG keyrings.

Geoffrey Styles said: “Even after moving over here from Romford after World War Two I have still managed to retain my British sense of humour and I felt it would be a good joke to present Reverend Dudley with a token of our respect with his family name emblazoned on it.

“He has a very good sense of humour himself, so I hope he will put the van on his desk, put the calendar up in his family kitchen and add the book to his library.”