DZG has funded research into tapir reproduction, which experts hope can be used to increase breeding rates in the future. 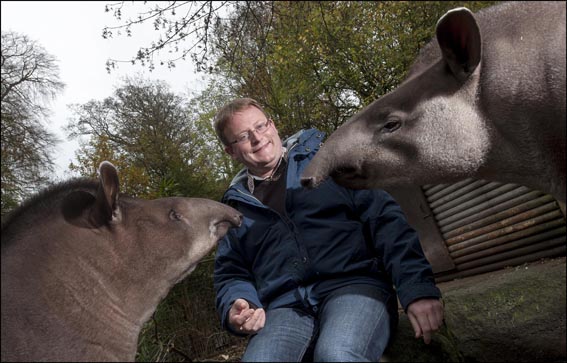 The breeding success of Malayan tapir has widely been recognised as an issue, with captive populations in European zoos not considered to be self-sustaining.

But thanks to the research into tapir reproduction by expert Matt Hartley (pictured)  and funded by DZG – this worrying pattern could ultimately change.

Matt, an independent consultant for UK zoos, certainly knows a thing or two about tapir.

As a conservation and research scientist he is also the veterinary advisor for EAZA (European Association for Zoos and Aquariums) tapir breeding programmes.

Through his extensive studies of the species Matt was aware that issues of reproductive failure had been found in some tapir. And he was determined research should be carried out into reproductive patterns in a bid to see if anything could be done to ultimately increase rates.

He says: “We have found issues with the reproductive failure with some tapir. 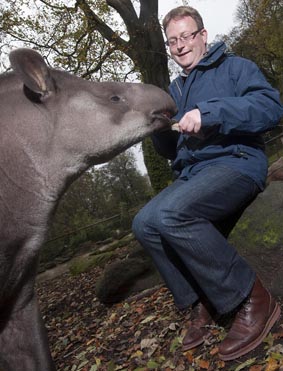 “Work had been done on faecal hormone analysis in rhinos but nobody had used it in tapir.

“We thought it would be possible and so I sent out an email to find veterinary students who would like to be part of the research programme.”

Zoo vet Adam Naylor was chosen to conduct the research, and DZG  known for its extensive conservation work to protect endangered and vulnerable animals  offered to fund the entire project.

As an avid supporter of conservation work and with our own plans to continually expand such projects at DZG, our Curatorial team put forward the £3,500 needed to allow Matt’s research plans to become a reality.

Matt and Adam  who has gone on to study a Masters degree and was selected against strong competition for a  three-year veterinary training programme at Edinburgh Zoo to become a European specialist in zoo health management  used the money to work with zoos across the UK on their research.

Among those involved was Chester Zoo, which has a special unit specialising in hormone analysis.

“We wanted to be able to investigate the reasons why.

“In order to improve breeding success and achieve sustainability goals, a complete understanding of tapir reproductive biology and endocrinology is needed.” 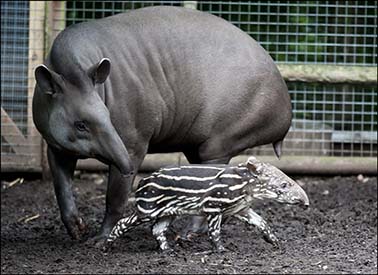 The study was based around faecal hormone analysis and involved a range of female tapir from zoos across the UK, from Edinburgh down to Kent.

Matt said: “Essentially we were testing for the waste products of hormones. With the pregnant tapir we were able to monitor hormone changes all the way through their pregnancies.”

Changes in levels of the hormone progesterone were detected during cycles in Malayans, although results from Brazilian tapir – the species held at DZG – were not as conclusive.

Despite this, Matt hopes the results taken from the Malayan breed can be used to potentially increase levels of reproduction.

He added: “We hope to use these results to monitor