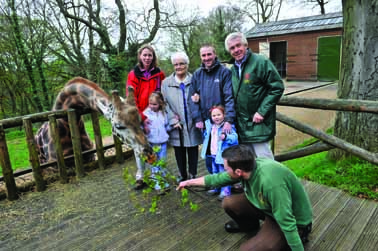 Doris, 83, of Kingswinford was employed as the zoo’s deputy cashier during the 1950s  along with seven other members of the Bratt family who worked on site!

Doris said:?”I??met Ken at the zoo and we both loved working there. No two days were ever the same.

“We had our own family vehicle at the time and we were always using it to pick up and transfer exotic creatures all across the country. It was a round-the-clock job, and Ken was out at all hours of the day.

“On one occasion he picked up two giraffes from Bristol  the crate wasn’t quite tall enough so he cut two holes in the crate and the creatures travelled back with their heads poking out through the top while Ken had to plan a route avoiding low bridges!

“Another time he collected an adult gorilla and travelled by night as he was told the animal would be upset if he was moved in daylight.

“Unfortunately, Ken’s vehicle was stopped by police and he was questioned as to what the load was. When he explained his unusual cargo, the police officer didn’t believe him and insisted on opening the crate ­  exit one very scared policeman!”

Doris also remembers there were no quarantine facilities at the zoo; if an animal was ill a member of staff would take it home and nurse it.

She said: “We had various species at our house over the years, including a monkey with flu. When I?look back now it’s amazing what we used to get up to!”