When Zoo Director Derek Grove’s school form teacher told him he wouldn’t stick at anything for long, he vowed to prove him wrong… and this week he celebrates 35 years’ continuous service at DZG. 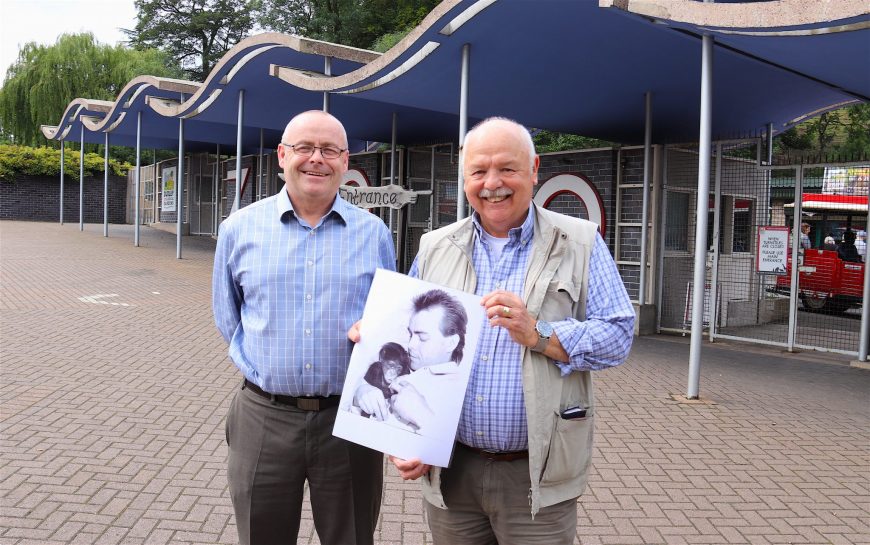 Derek was presented with gift vouchers and congratulated by David Sparks OBE, Chairman of DZG’s Board of Trustees, for his long and dedicated service, before having a flick through his fascinating photo album – including the time he handreared Josie the chimpanzee back in 1988.

Derek said: “It’s about finding a job you love doing and then it doesn’t make it a chore and I love working at Dudley Zoo.”

Derek was just 17 and working as a trainee boiler engineer when he was called out to fix a broken boiler in the hippo house and first became inspired to work with animals.

Derek added: “I had all the usual pets as a child, but never considered working with animals and I didn’t have any particular interest in zoos as we rarely visited them.
“But during that boiler job I remember watching a keeper smashing ice on the hippo moat and I thought that looked great fun. Not long after I was starting work here as a trainee cat keeper and I’ve been fortunate to have worked with a great many animal species, including elephants for 18 years.”

Since then, Derek’s rapidly risen through the ranks, working as Senior Curator for 20 years before taking the helm as Zoo Director in 2015, but his dedication to better the lives of animals and improve and extend their enclosures has remained steadfast.

Derek said: “To want to improve the quality of care for our animals has been with me through my whole working life and it’s something we will continue to progress with.

“And after becoming Zoo Director I’ve pushed to develop our conservation work with both in-situ and ex-situ projects, which is a big step forward from what we did.

“When I leave the zoo I’d like to look back and say I’ve achieved all the improvements I wanted to do and I’m glad to have the opportunity to play my part.”

Previous: Pandora, Prometheus and Primrose!
Next: DZG praised for data