We’ve sad news about DZG’s oldest animal, Beryl, the Chilean flamingo, who passed away at the weekend. 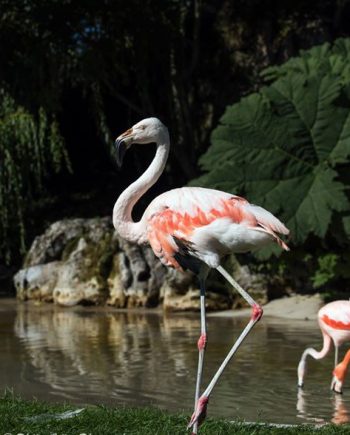 Although we’ve not got an official date of birth on record for the leggy bird, we believe her to be in her mid-fifties.

Curator Richard Brown, said: “We know Beryl was here during the early 1970’s and she was already an adult then so she was a very good age for the species.

“She was easily recognisable by her wings, as one was shorter than the other and keepers had a bit of softspot for the old girl.

“And having been here longer than all serving staff and all the other animals we’ve got on site, it really is the end of an era.”

The flamingos are among the most photographed species at DZG as their enclosure is one of the first to greet visitors as they come on site.

Earlier this year we increased our flock of eight by twenty following the £120,000 revamp of Flamingo Falls, which saw a new running waterfall and a bigger den built, which included an internal pool where visitors could see the birds even when they were off show outside due to inclement weather.

Chilean flamingos are listed as near threatened and are native to the warm, tropical environments in South America, inhabiting muddy, shallow lakes.

A flamingo’s striking pink colour is sustained by their diet – a red plant pigment called beta carotene, which is absorbed into their body and into their feathers.

Thanks to zoo member Phillip Collett, for the photograph of Beryl.

Previous: Feed the birds!
Next: Thanks for the tools!