Forty years on a former keeper revisits the DZG big cat enclosure where he escaped by a whisker. . .

Dave Goddard still has nightmares about the day he almost became big cat food while carrying out an act of kindness during his work as a keeper at DZG in the early 1970s. 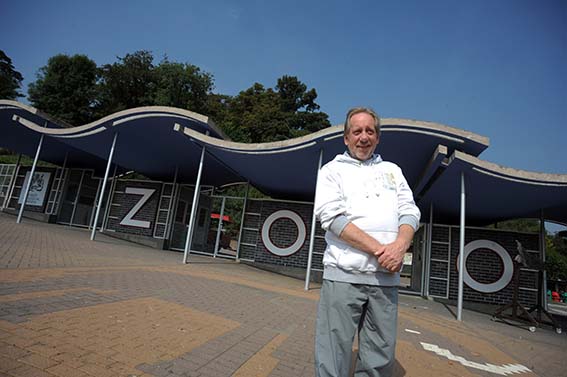 He came within a whisker of being pounced on by a lion while retrieving a visitor’s purse which had fallen into its enclosure.

Forty years later Dave was back at the scene of his biggest scare  but this time the experience was altogether more pleasant. He was treated to a trip down Memory Lane with a tour behind the scenes of the big cat section where he spent some of the happiest – and hairiest – days of his life.

Dave again came face to face with majestic big cats – behind the safety of toughened glass in the new viewing area. And he got close enough to feel their breath as he was accompanied by Chief Executive Peter Suddock and Assistant Curator Richard Brown to meet Sumatran tigers Daseep and Joao through metal grilles in a corridor behind their enclosure and to feed female snow leopard, Nanga.

The outing brought memories flooding back of the fun, frights, hard work and sheer joy he experienced and the friends  both animal and human – he made during his two years as a young keeper.

“It was the best job I ever had,” he said. “The pay wasn’t good but I loved the job so much that I used to go round in the evening to watch and listen to the animals settling down after the zoo was closed to the public.”

His close shave came when a visitor begged him to retrieve the purse she had dropped into the sunken lion enclosure. Dave advised her to return later when he would attempt to reach the purse after the big cats had moved inside for the night. But she pleaded that her children needed her at home later and she had no money other than what was inside the purse. 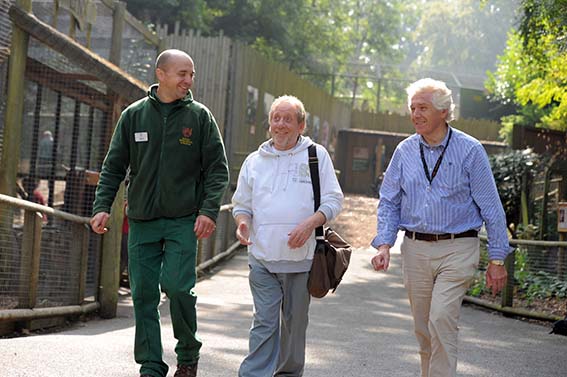 He said: “I foolishly fell for her sob story and went in to the enclosure to fetch the purse while two security staff kept watch I thought that as long as the lions were at the top part of the enclosure I had time to dash the short distance from the door to where the purse had fallen.I knew they wouldn’t move for a while because of the shock of seeing someone coming in to their space and I thought that would buy me vital seconds.

“But I hadn’t counted on how fast one of the lionesses would move and I just made it back inside in the nick of time. As I dived through the shutter and the guard slammed it down behind me I felt the lioness bang up against it.

“You could say I escaped by a whisker. I still have nightmares about it but often wonder whether the woman who dropped the purse even remembered the incident after that day.”

It was a lesson learned the hard way for Dave, who had worked in the building trade until joining the zoo team in 1970, aged 19. 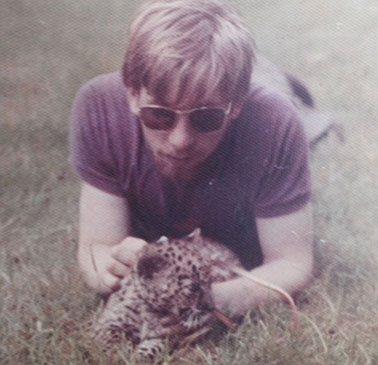 Highlights of his career include hand-rearing Rolo the spotted leopard cub  pictured right  witnessing the birth of a cub to popular polar bears Helga and Hans and helping to feed, train and move Cuddles the killer whale, which meant getting into the water to help a vet manoeuvre his pectoral fins into the transport sling.

“The water was so cold that the boss sent for a bottle of whisky and handed us a tot to warm us up while we were in the pool.”

He says he was tempted back to the building trade b