Our Registrar and Research Co-ordinator, Dr David Beeston, has done it again  guided one of his students to a top title for the second year running.

Dr Dave, who is the Midlands regional co-ordinator for the National Diploma in the Management of Zoos and Aquarium Animals (DMZAA), mentored Louise Moody who has just been named BIAZA Student of the Year. 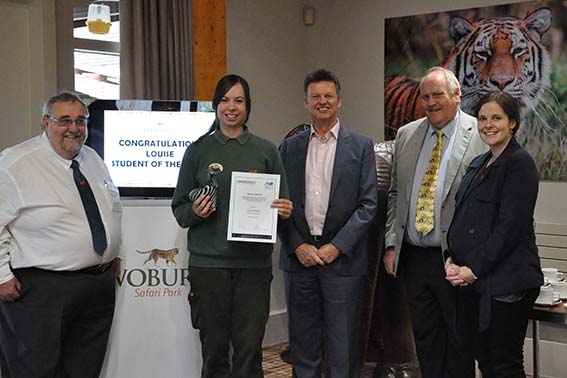 Louise, from Woburn Safari Park in Bedfordshire, gained 15 distinctions in the DMZAA course run by Sparsholt College in Hampshire and sponsored by BIAZA – the British and Irish Association of Zoos and Aquariums.

She was presented with a very special glass trophy  a model of a zebra made in village communities in South Africa from recycled drinks bottles.

Dr Dave said: “This is the second year in a row one of my students has won the award, as Sophie Cooper from Twycross Zoo won it last year.

“I am really proud, not only because it’s the second year on the run someone from my region has taken the award, but because Louise was an absolutely model student. 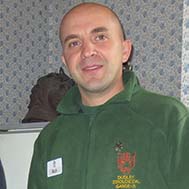 “She submitted all her coursework on time and the amount of distinctions she achieved was remarkable, especially as she studied in her own time while holding down a full-time job.”

As the course co-ordinator for the Midlands, Dr Dave has to see his students six times over the three years of the course, offering guidance and support.

And our very own Curator Richard Brown, pictured right, is a past BIAZA Student of the Year. He scooped the title in 2006.

The DMZAA course was introduced in 2004 and pioneered at DZG