History was made yesterday evening when DZG raised the RAF standard atop Dudley Castle to commemorate the Dambusters raid, seventy years ago. 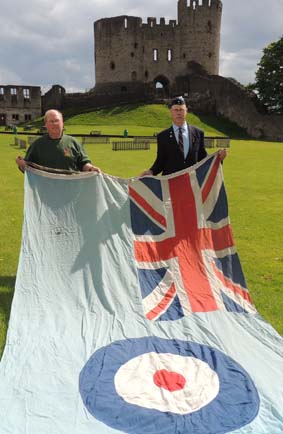 War veteran, Keith Bloomer, a member of Dudley RAF, said: “It is absolutely brilliant to see the flag flown from the top of Dudley Castle to mark this occasion.

“They always fly it during the Battle of Britain events, but it’s so nice to know that Dudley Zoological Gardens recognise the flying bomb squads’ efforts in giving their lives to help stop World War II.”

At the time of the attack DZG had been open for just six years and many male members of staff left the zoo to join the war effort.

Despite a reduced workforce the zoo remained open, relying heavily on a Mum’s Army to carry out duties across the site.

RAF veteran Keith Bloomer and Malcolm Clements of DZG’s Maintenance Team, prepare to fly the RAF flag at the top of Dudley Castle to commemorate the 70th anniversary of the Dambusters raid.

Previous: DZG boss is Director of Year!
Next: Introducing Dudley and Lola