An animal-crazy schoolgirl from Buckingham had a fifteenth birthday to remember when she was treated to a Keeper for a Day experience at DZG. 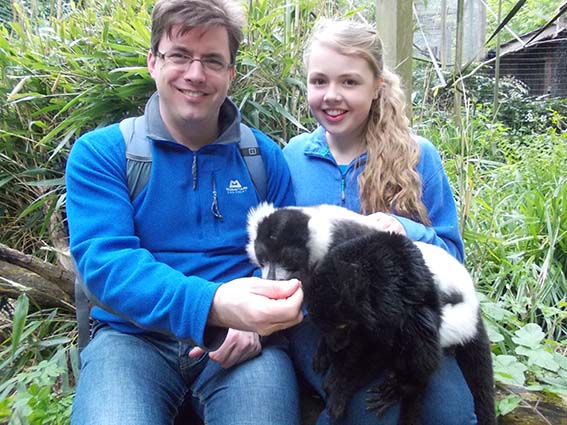 Bryony Hallett, alongside dad, Steve, shadowed keepers and got close to some of her favourite animals.

Steve said: “We organised it for Bryony’s birthday present and she was so excited.

“We travelled to Dudley Zoo from Buckingham because she loves snow leopards, although we didn’t get to see much of them as we were told they had just had a cub a few weeks earlier, so were tucked away.

“That didn’t matter to Bryony though as there was such an amazing variety of animals that we came into contact with and were able to get right up close to, especially the lemurs which she absolutely loved, as they are another of her favourite.

“It was a fantastic day which we would thoroughly recommend to everyone and it was great experience for us to share together just the two of us.

“We’ll have to come back soon to see the snow leopard cub now it’s made its public debut.”

Previous: Thanks for a fab weekend!
Next: Happy First Birthday, Eve!