We’ve discovered our gorgeous Carpathian lynx twins are boys  and have been named Dante and Dakota. 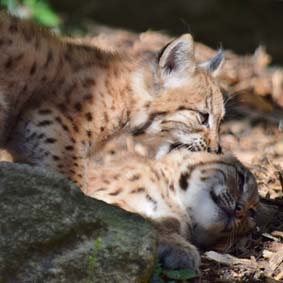 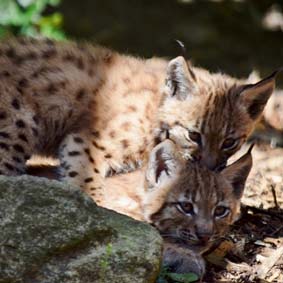 ABOVE: Brotherly love – Our new Carpathian lynx twins are boys! Thanks for the great pics Karen Edwards 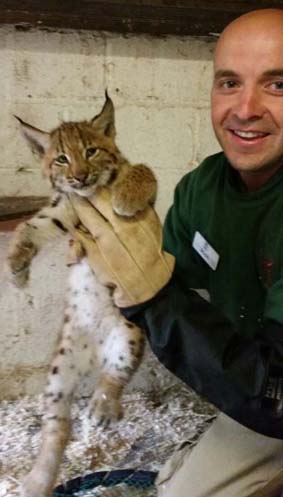 The d-lightful native names were picked by big cat keepers, in line with the tradition of all the family’s names beginning with the letter D.

The pair were born to mum Daisy and dad Dave on May 20 and have one-year-old siblings called Dick, Dom and Daphne.

Dante and Dakota were sexed, weighed and given their first inoculations by zoo vet Peter Stewart and DZG Curator Richard Brown, pictured right.

Senior Keeper Neil Flockhart said the playful boys were having lots of fun together and entertaining visitors with their antics.

He said: “The young twins see their parents and their brothers and sister playing on the glass pyramid in their enclosure and have started copying them.

“They absolutely love climbing over the glass which is a real treat for visitors in the viewing area.

“Many people have been getting an extra close look at the kittens and several have take some wonderful pictures and videos.”

BELOW: One of the cubs enjoys playing on the pyramid  thanks Chris Rockey for the beautiful picture 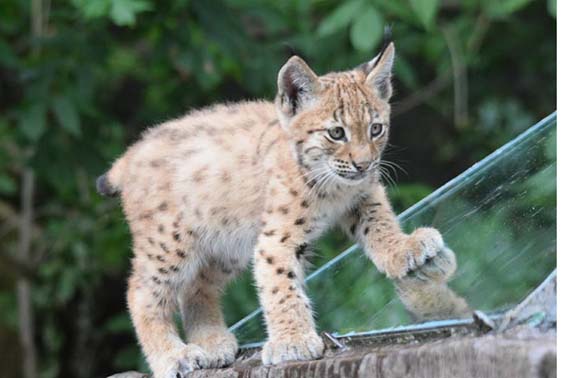 And one of our members Sarah Holt took a fabulous film of the brothers sliding down the pyramid.  Take a look at the cubs in her clip below.

Dante and Dakota are the second DZG litter from Daisy and Dave. The first – when triplets Dick, Dom and Daphne were born on May 23 last year – was also a first for the zoo.

Carpathians are a relatively new species to DZG’s collection, with Dave translocating from Salzburg Zoo in Austria and Daisy from Zoo Veszprem, Hungary in Autumn 2012, as part of a European conservation programme.

Previous: Welcome baby Doyle!
Next: Flying in from Florida