An extremely loud addition to the primate family has arrived at DZG. 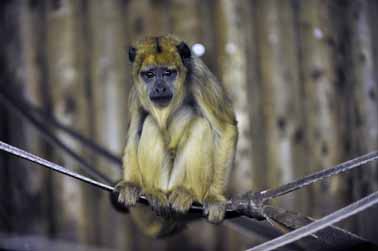 Two female black howler monkeys have transferred from Twycross Zoo, in Warwickshire, as part of a breeding programme for this endangered species which originate from South America.

DZG?Assistant Curator, Richard Brown, said:?”They have the loudest calls out of all species of monkey and can be heard up to three miles away!

“The monkeys have a large pouch at the front of their mouth, which they fill up with air and use this to howl.”

He added:?”The males and females can be easily identified, as the males are black and the females are blonde.”

It is the first time the species has been part of DZG’s collection, and three-year-old Abyanni and Alicia, aged two, will be joined by a male later in the year.

CAPTION: Meet Alicia, one of two female howler monkeys that have moved into DZG.