Croc-crazy schoolboy, Will Rennison, travelled from Australia to be reunited with his favourite reptile at DZG. 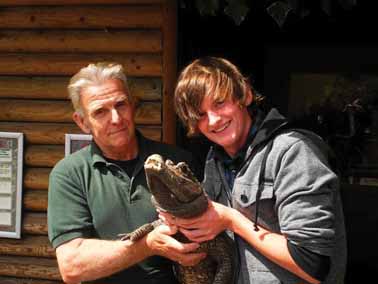 Will, aged 15, of Perth, was just nine when he adopted one of our African dwarf crocodiles and named her Crikey, the trademark expression of his hero, the late Steve Irwin.   Since moving to Australia  two years ago Will has kept in touch with zoo staff and dropped in to say hello to Crikey during a whistle-stop UK holiday.   Will said: “As far as I can remember I have always loved crocodiles. When I was younger I liked them because they were exciting and not a fluffy pet like a dog, and I feel the same now.    “I hope to study at university in Australia and my ambition is to be a reptile keeper.”   DZG Head of Reptiles Graham Chilton said: “Will is going to be Steve Irwin the second! From an early age he was always enthusiastic and dedicated with the reptiles, now is he is confident with them, too, and his ambition is to work with them.”   Will’s family flew back to England for a family party, but not before mum Sarah had contacted Graham from Australia to arrange a reunion between her son and Crikey – now 10 years old and a metre and a half in length.   Sarah said: “As a ninth birthday present for Will we adopted Crikey and carried on the tradition for consecutive anniversaries. He absolutely loves the gift.   “DZG?has always treated Will wonderfully, nothing has ever been too much trouble in arranging keeper experiences, especially this time when it was such short notice.   “We’d like to say a huge thanks to all the staff for making it possible – and helping Will realise his dream.”   CAPTION: Will Rennison who travelled from Australia to say hello to the crocodile he adopted at Dudley Zoological Gardens, with Head of Reptiles, Graham Chilton and 10-year-old African dwarf croc, Crikey.