A pair of paradise cranes is making history at DZG. It’s the first time since the zoo opened in 1937 that we have held this striking species within the collection and staff have launched a breeding programme for the South African birds. 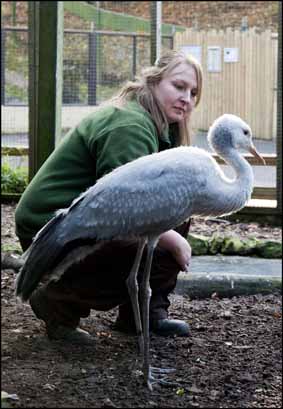 Paradise cranes, also known as blue cranes or Stanley cranes, are the national bird of South Africa. Their feathers were traditionally presented to men from the amaxhosa tribe, to celebrate and reward acts of valour.

The birds were allocated via the European Endangered Species Programme, and staff hope to acquire a further male and female to form two breeding pairs.

Team Leader Birds Section, Kellie Piper, said: “They are both really friendly and come right up to the fence and make little noises to greet visitors.

“They quickly made themselves at home with the other birds in the aviary.”

Keepers have started training them by getting them to follow a target and touching it for a reward.

Training the birds at this age will help keepers administer necessary medicines and carry out essential health checks on the cranes in the future, as they become less friendly as they get older.

The species, which can live up to 60 years, declined rapidly during the 1980s and its status is now classified as vulnerable in the wild. The decline is attributed to direct poisoning, power-line collisions and the loss of its grassland breeding habitat owing to deforestation, mining activities, agriculture and industrial development.