Two paradise cranes are proving perfect pupils for DZG keepers when it comes to the tricky business of training. 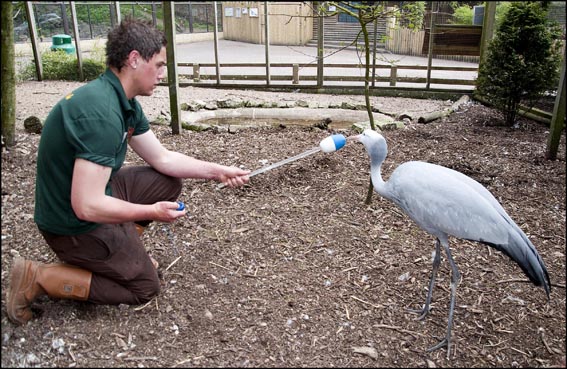 Keepers are working with the two 18 month-old pair every day, encouraging them to follow a target and touch it with their beak in exchange for a tasty reward.

Birds section leader, Kellie Piper, said: “The cranes are doing really well and now know if they touch the target then they’ll get a mealworm treat for their efforts.

“Training them while they are still quite young will help us administer any treatment or carry out health checks on them when they’re older, as their behaviour will soon change and they will start getting aggressive around three years of age.”

The cranes, a male and female, arrived at DZG at the end of last year as part of the European Endangered Species Programme and it is hoped a further male and female will be found to form two breeding pairs.

Staff will soon be moving the two South African birds from their temporary aviary into a larger paddock on site, when their training will come into its own.

“If we can get them following a target, then we will be able to move them to where we need them to be” explained Kellie.

“It is not only safer for us, but will cause less stress and anxiety to the birds as well.”

The species, which can live up to 60 years, is classed as vulnerable in the wild following a rapid decline in the 1980s due to poisoning, deforestation, mining activities and power-line collisions.