Completion countdown has started on the multi-million pound restoration of two iconic Modernist buildings at DZG. 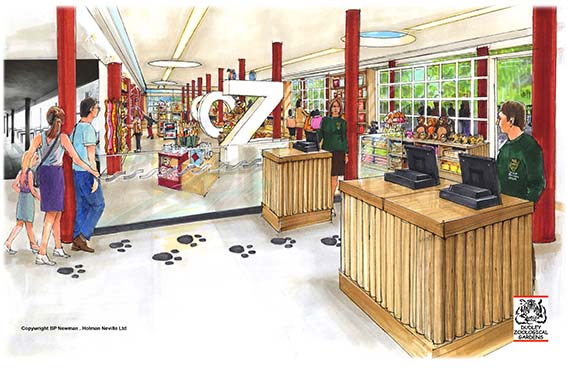 And artists’ impressions of the Tecton structures  the main entrance and Safari Shop  are offering visitors a glimpse of the striking 1930’s designs which have been the site of extensive renovation since September.

DZG CEO, Peter Suddock, said: “The work is bang on schedule for Easter opening and as we’re nearing completion we’re displaying artists’ impressions externally around the shop so visitors can see how this renowned world architecture will look when restored to its former glory, while embracing 21st century technologies.”

Alongside a spacious shop, the building will also offer a new entrance, with direct access from the extended zoo car park, and an integral Tecton Interpretation Centre. 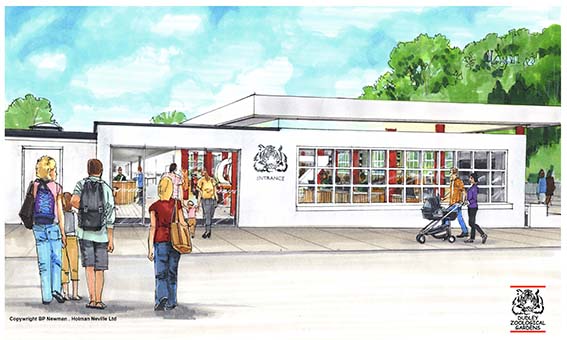 The centre will explain DZG’s 12 Tecton buildings  the world’s largest single collection  designed by Russian architect Berthold Lubetkin and constructed between 1935 and 1937 using a pioneering system of reinforced concrete.   Heritage Lottery funding has enabled repair work to be carried out for the first time on four of the structures  the Safari Shop, the eye-catching entrance, bear ravine and kiosk one, affording them a new lease of life as part of the multi-million pound makeover.   And dedicated restoration workers are using methods and materials from almost eight decades ago.   Mr Suddock added: “All concrete repair work has been completed employing the exact formula used when they were built and we’ve also identified original paint colours.

“It’s been a fascinating journey taking a unique set of buildings apart; so much previously-unseen architecture has been revealed and it’s also offered an insight into past construction methods.”

He added: “The structural engineering for the time was very intelligent. For example, the entrance has 39 pins supporting the roof’s five iconic concrete waves’ that form an interlocking serpentine. We now understand how that was constructed whereas prior knowledge was very limited.

“It’s not all retrospective; we’ve re-insulated the shop’s roof, added underfloor heating and new windows and doors and opened up the space so we’ll be able to offer a greater retail experience for visitors.” 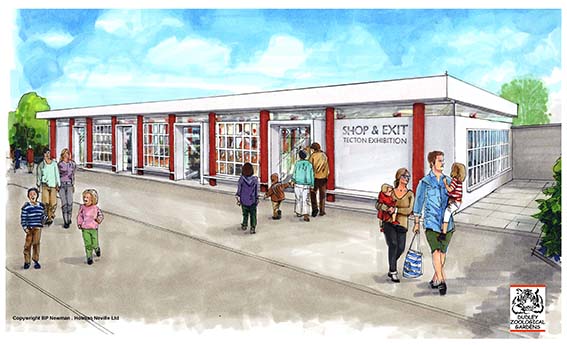 Costs for the entrance and shop are £417,000, with £200,000 funded by HLF, and the remaining £217,000 paid from DZG’s own coffers.    The funds are part of a £1.15million HLF contribution that, alongside the four Tecton restorations, has seen the refurb of our 1958 chairlift and the launch of an apprenticeship scheme for concrete repair and conservation skills.   Initial bids for the programme started in 2009, with final approval in June 20