DZC’s key conservation role in securing the future of the endangered black lemur has just got a little bigger. 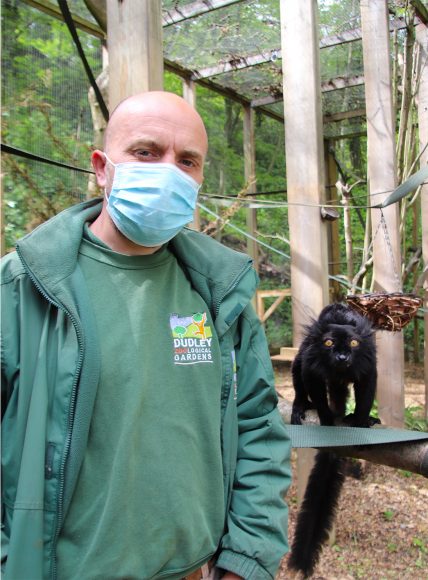 But Richard is now not just the co-ordinator of the entire European captive population, but he’s also overseeing the International Studbook (ISB) and studying the genetic make-up of captive black lemurs as far afield as America and Japan too.

Richard said: “It’s really exciting to have a bigger gene pool of the captive black lemur population to work with.

“I’m now overseeing 350 black lemurs in more than 75 collections worldwide, studying their genetics and making recommendations about which of these lemurs are suitable for exchanges or breeding.”

Richard is aided by DZC Registrar Nicola Wright, who updates data in the studbook by collating details of all births, deaths and transfers within collections, as well as identifying surplus animals.

Richard added: “It’s crucial for the survival of the species that we keep the gene pool viable, so we have to get the genetics right when matching pairs together.

“We have to identify who is genetically closely related, to avoid in-breeding and prevent any defects.

“It’s a really interesting task and hopefully the new role may also open up the potential for us here at DZC working with Japanese zoos in the future.”

Lemurs can live up to 30 years in captivity and, on average, they make between one and two moves throughout their lifetime.

Here at DZC we have breeding pair, Florence and Bryan and their three-year-old offspring, Jimmy, who was born here. Ten-year-old Florence moved to Dudley in 2016 from Bioparc Fuengirola in Spain, while, Bryan, aged 15, relocated here from Luxembourg in 2009. He was born in France.

The pair’s first offspring, daughter Kimmy, who was born at DZC in 2017 and was our first black lemur birth in a decade, was moved to Planckendael Zoo in Belgium in 2019 after Richard successfully matched her to a male there.

You can find our black lemurs on the lower zoo site opposite the chimp paddock, just past the Bear Ravine.