Year 12 students from Wednesbury had a lesson in conservation and the work DZG does in helping protect some of the world’s most endangered animals. 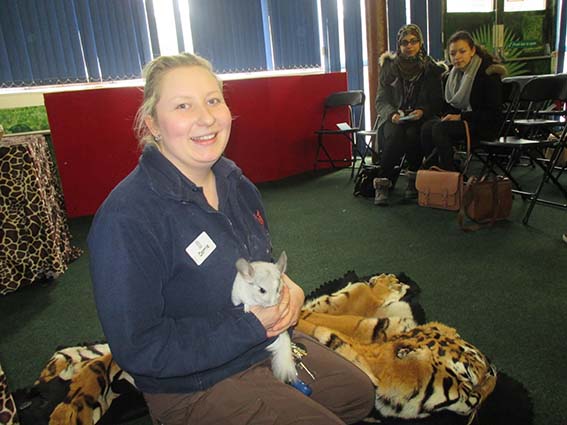 The class from Wood Green Academy took part in a Wildlife Conservation session in our Discovery Centre led by Presenter, Dorrie Hall, pictured above.

The group learned which animals were most in danger in the wild and how they can take steps to help protect the environment.

Dorrie said: “During the session we used a tiger skin, which was donated to our education department, to raise awareness of people who illegally hunt tigers or threaten their valuable habitats.”

DZG’s conservation programme for tigers concentrates on the Sumatran, of which there are approximately 300-400 in the wild.

We hold an impressive breeding record for Sumatran tigers; eight cubs born at our Castle Hill site between 2000 and 2005 increased the world population of this rare sub-species by two per cent and went on to boost programmes across the world.

With more tiger rugs in the world than tigers in the wild, captive breeding provides a vital safety net against extinction.

Previous: Red alert for lories
Next: An amazing opportunity