Seven tortoises have been colour coded in a bid to help keepers identify them. 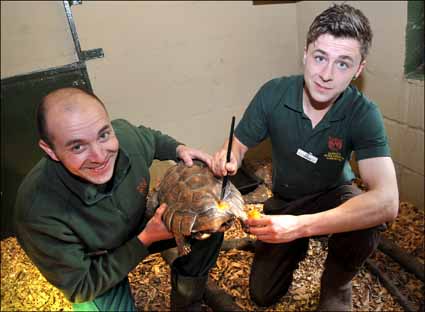 The six and seven-year-old African spurred tortoises are so similar in appearance staff struggled to tell them apart so marked them with a variety of colours which has made it easier to identify the animals for weighing.

Keeper Jay Haywood said: “Our tortoises do not hibernate totally in the winter, although they are less active than usual, but in the warmer months they eat more, and this is when they grow.

“We will be checking their growth once a month, and it will be so much easier now we have colour coded their shells with a dab of paint.”

African spurred tortoises originate in the deserts of Africa and can grow to three feet in length. 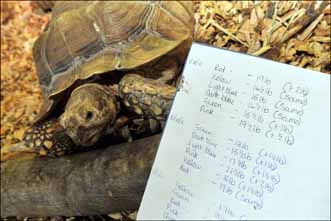 They are also known as Sulcata Tortoises (Sulcata means furrowed’ and refers to the ridges on their scales).

Tortoises are an endangered species due to demand for fashion accessories and ornaments made from their shells.