Half-term visitors got up close and personal with some of our creepy crawlies as we started spreading the word about our support for a global conservation project. 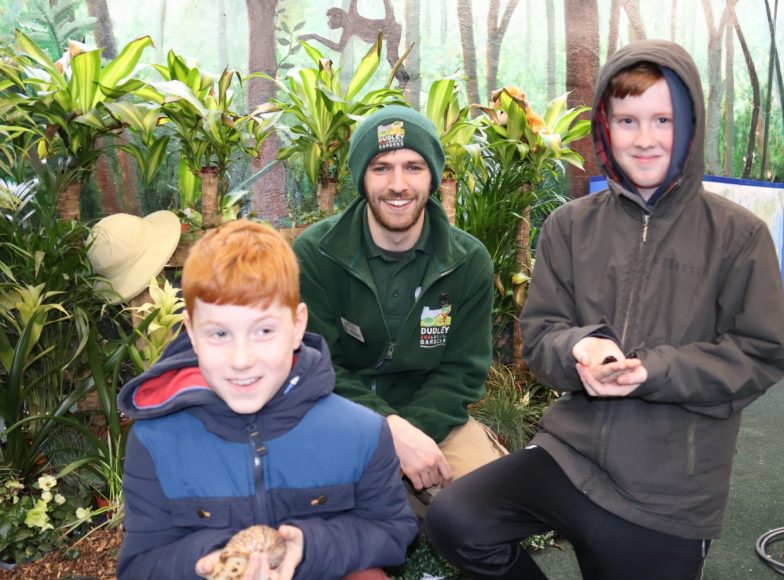 ABOVE: Nine-year-old Caleb Corbett and his brother Brecken, aged 11, from Telford, were introduced to some our creepy crawlies by Conservation Officer Chris Leeson.

Youngsters got to handle our Madagascan hissing cockroaches and African giant land snails as part of an event in our Rainforest Room to raise awareness of the plight of Asian songbirds.

The children were also able to make fat balls which could be left on site to give to our native wild birds or they could take them home to put up in their own gardens.

Conservation Officer Chris Leeson said: “Families enjoyed meeting the snails and cockroaches and the youngsters were delighted with the fat balls they made to feed the birds.

“It was also chance for us to start telling people about a conservation project we are supporting called the Silent Forest campaign.

“Over the next year and a half we will be running several awareness and fundraising events in aid of the campaign to save Asian songbirds from extinction.”

Throughout the year we’ll have plenty of activities lined up to highlight the plight of songbirds taken from forests in Southeast Asia – with many birds traded as pets or stolen to take part in singing contests.

DZG has pledged to raise €2,000 towards the international campaign and fundraising buckets and money spinners can be found in the Rainforest Room, Lorikeet Lookout, Farm and on the land train for anyone who wants to pledge their support.