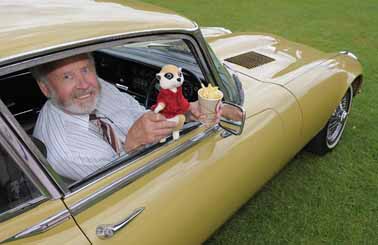 More than 70 vintage vehicles were on display in the courtyard of 11th century Dudley Castle on Sunday (June 19) as part of Father’s Day celebrations at the zoo which also included a special meerkat adoption package and a pie n’ pint lunch.

DZG?Head of Media and Communications, Jill Hitchman, said:?”The annual classic car show is always a popular event with lads and dads, and this year we teamed up to run it on Father’s Day and created an adoption package for Martin the meerkat, one of the best parents within our animal collection.   “He currently has 13 offspring and is a brilliant dad, so we put together an adoption which included a special Father’s Day certificate and gift card, a photograph and factsheet about Martin, four ZooNooZ magazines throughout the upcoming year, plus two complimentary DZG?tickets and a cuddly toy meerkat.   “We also ran a Father’s Day Meal Deal with pie, chips and a pint, too, before dads took in the classic car show.”   Among the cars on display at the event were a rare 1961 Daimler Dart, a Rolls Royce Silver Shadow II and a 1972 E-type Jaguar.    Show organiser, Maurice Cole, said: “Boys of all ages love classic cars and this year there were more than 70 vehicles from across seven decades lined up in the courtyard, so it was an ideal way to spend Father’s Day.”   CAPTION: West Midlands Classic Car Club show organiser, Maurice Cole, celebrates Father’s Day at DZG with a meerkat adoption package and a pie ‘n’ chips lunch.