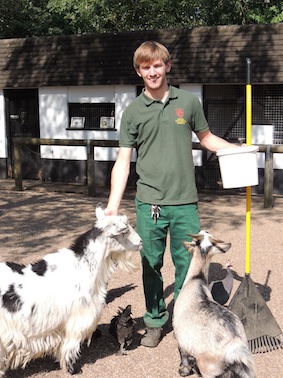 Hard work and determination paid off for former DZG volunteer, Chris Leeson who has landed a permanent job as a trainee keeper.

Chris, from Birmingham, started full-time employment on the zoo’s farm, after working as a seasonal in the Discovery Centre, a volunteer and weekend-worker for the past seven months.

Senior Curator, Derek Grove, said: “Chris has shown himself to be extremely hard working and enthusiastic and has shown his dedication to the role by volunteering to help out on the farm once a week.

As well as learning the ropes down on the farm, 22-year-old Chris will also train on the other zoo sections and will eventually join DZG’s in-house NVQ Level 2 training scheme in the care of exotic animals  another step closer to his future ambitions of working with big cats.

Chris, a wildlife conservation graduate from the University of Kent, said: “I’m delighted to be given the chance to be a full time trainee keeper at DZG and happy that my hard work has paid off.

“I really enjoy working here and love working with the animals and explaining all about them to visitors.”