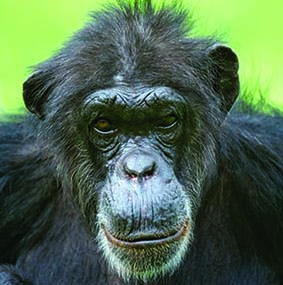 Chimpanzee, Mandy has been brushing up on her painting skills  and created a masterpiece for the site’s new Press Office walls!

DZG Head of Media and Communications, Jill Hitchman explained: “Mandy’s artwork came about quite by chance as keepers had bought the painting kit as a birthday present, back in December, for one of the other female chimps, Banika.

“Unfortunately, Banika wasn’t in the slightest bit interested in the paints so keepers shared them around and soon realised Mandy was a natural with a brush!”

Portrait of the artist: 38-year-old Mandy 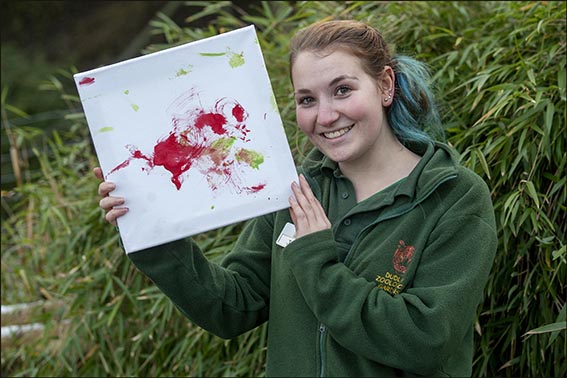 Jill added: “It’s a somewhat unusual piece, but we’re looking for artwork for the walls of our new Media and Communications suite, and it will certainly be a talking piece for visitors.”

The 38-year-old’s design won’t be the only ape artwork on display  it will join an original oil painting from the 1960s created by a DZG chimp, called Cindy-Lou, that was exhibited in a London gallery and later sold at auction.

Jill said: “Cindy-Lou’s work was donated to us a couple of years ago by a Kidderminster family who bought it at auction in 1966 and no longer had wall space after moving to a smaller home.

“It has been on display in the main offices, but now we’re giving it a new home in the Press Office where it will be installed alongside Mandy’s masterpiece once it has been framed.”

FEBRUARY 2013:  Mrs Dorothy Jukes, of Kidderminster, hands over the painting by DZG chimpanzee, Cindy-Lou  pictured below  to CEO ?Peter Suddock. The work had been in the Jukes’ family since they purchased it at auction in 1966 following an exhibition of the chimp’s work in a London art gallery. 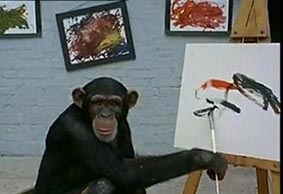 For the full story on Cindy-Lou’s artwork  including a British Pathe News clip, click on the link https://www.dudleyzoo.org.uk/news/chimp-artwork-donated