Our baby Humboldt has taken his first tentative paddle in Penguin Bay, with a little persuasion from Section Leader Nicola Wright. 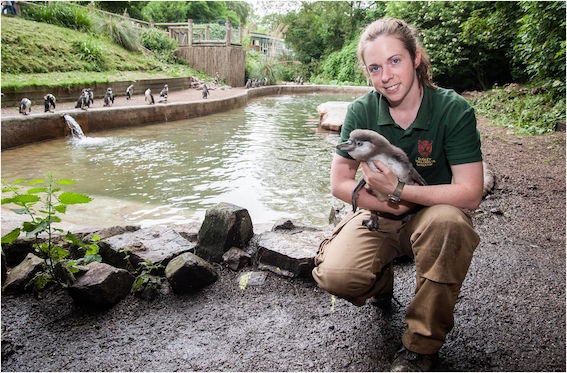 The four month-old youngster, who has been named Sebastian, has been hand-reared by the bird team since he was discovered abandoned on the sand shortly after his birth, but has been spending the last few weeks visiting the poolside colony – the UK’s largest colony of parent-reared rare Humboldts.

Nicola said: “We are keeping the penguin in a wooden pen on the edge of the pool at the moment for a few hours a day, so he gets used to the other birds and the new environment before he rejoins the 70-strong colony permanently.”

The chick, who is now starting to sport his juvenile water resistant feathers, was also given his first taster of the pool.

Nicola added: “We introduce the penguins to the water quite slowly. We do it on pool cleaning day and get them in when there’s only a small level of new water in when we’re refilling it, so we’re not literally throwing them in at the deep end.

“But the chick seemed a bit hesitant to get his feet wet and the first experience was just a quick paddle as he turned and followed me out of the pool instead.

“We’ll keep trying and he will soon get used to it.”

Keeper Kriss Pearson explains more about Sebastian in the video below…