A baby helmeted guinea fowl has become a talking point, thanks to its unusual plumage. 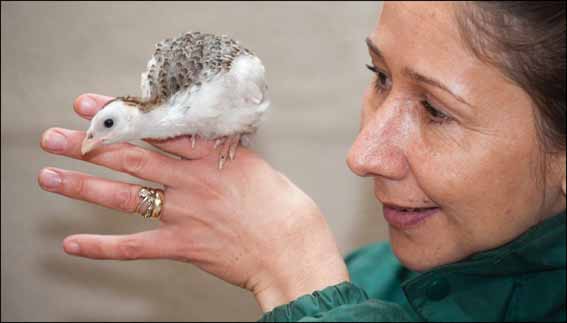 CAPTION: Headturner: this helmeted guinea fowl’s pied plumage sets him apart from the usual all-grey of his siblings. The chick is pictured with Senior Keeper Les Lewis.

The chick, which has a white body and grey wings, looks quite different from its all-grey six brothers and sisters.   Curator Matt Lewis explained: “The chick has become very popular with visitors, who often question whether it is a different species from its siblings.    “However, it simply has a pied plumage and we are pretty certain that it will keep its unusual appearance for life.”   The seven chicks will range freely on DZG’s farm.

Previous: Now we are 10!
Next: Pumpkin plays a game