Two cheeky little monkeys who surprised staff with a December birth are settling in well. 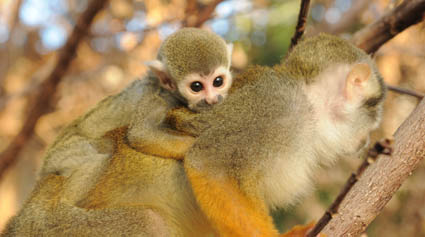 The baby squirrel monkeys, who have not yet been sexed or named, are the offspring of mums Stumpy and Mrs Elvis, and dominant male, Oscar.

Curator, Matt Lewis, explained that the youngsters are inseparable from their mums until three months of age.

He said:?”Until they are twelve weeks old they ride on their mums’ backs, so we really have no idea what sex they are until we catch them up to microchip them. At this point they will be sexed and named.” 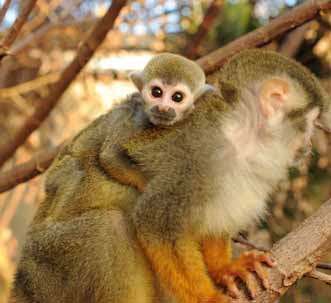 After three months the youngsters are carried around by other adult squirrel monkeys in the group.

Matt said: “The youngsters were a bit of a surprise when they arrived in December, as it’s not the usual time of the year for small primates to be born, but they are both doing well and are settling in with the rest of the group in Monkey Tails.”

CAPTIONS:?Stumpy and her baby are settling in at Monkey Tails, our walkthrough rainforest experience. 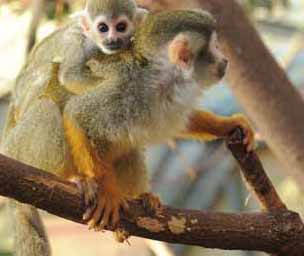 Previous: Grumpy day for penguins
Next: Year of the Dragon