DZG’s popular male Patagonian sea lion Oba was clearly in a cheeky mood during training this week when he stuck his tongue out to one of his keepers. 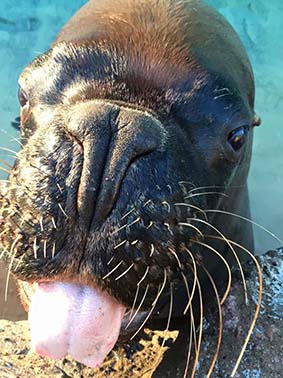 Senior Keeper Jodie Dryden was working with the 14-year-old when he made the playful gesture, shown right.

Oba, who arrived at Dudley Zoo from Marineland in Antibes in April, was already trained to perform many actions and all of them – including sticking his tongue out  are useful for medical purposes.

The clever creature, who weighs in at 237kg (more than 37 stone), can open his mouth for a dental hygiene check, waddle on to the scales to be weighed, sit still while having eye drops put in and show his tongue so it can be examined.

He has also mastered several other skills including staying on a podium, giving a wave, having a cuddle, taking objects in his mouth and doing a wonderful handstand.

Section Leader Jay Haywood said: “When Oba stuck out his tongue to Jodie there was no doubt he was in a cheeky mood and we couldn’t help but laugh.

“It’s a great photo. Oba is a real character who is fitting in very well and enjoying all the attention he gets from our visitors.” 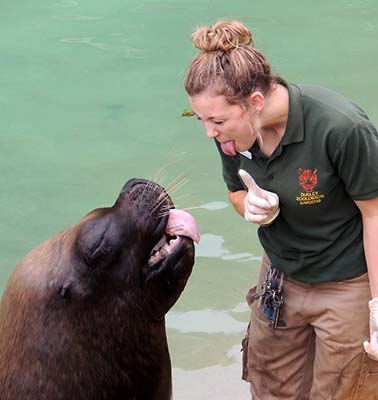 LEFT – Another great shot of Oba in fine form with Senior Keeper Jodie Dryden. Thanks to regular visitor and talented photographer Kathryn Willett for the picture

During the mating season, male sea lions won’t eat, but instead focus entirely on protecting their territory and females

Sea lions have no need to drink; they obtain all the water they need from their food

See what the larger-than-life character is up to on your next visit!