Kate Oliver and Rikard Anglerud travelled to DZG from London to become Keepers for a Day after they were charmed by a zoological garden in the heart of an 11th century English castle.

Rikard, who has recently moved to Britain from Sweden, was treated to the experience by Kate, who is on a mission to show him as much of the country as possible! 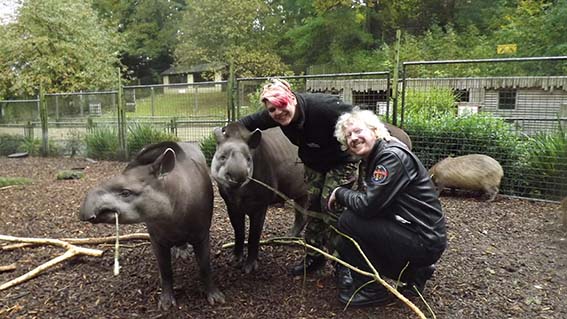 The couple had a great day and met all their four-legged favourites  big cats and tapirs  and gained some unexpected new ones after encountering the site’s mischievous lemurs!

Kate, who grew up in Worcester, said: “I was really pleasantly surprised by how many different things we saw and did, and that we had so much personal time with both the keepers and the animals. My heart belongs to the cats and it was great to feed meat on a stick to the snow leopards and tigers. They were surprisingly similar to domestic cats in their beauty and playfulness, but the noises they made were enough to remind you of their wild nature.

“However, lemurs were a surprise favourite too; the way they climbed all over you was really endearing, even if they were just looking for a piece of banana.”

Rikard, added: “The keepers were friendly, informative and unhurried. I liked that they put the zoo experience and animals in a wider context, talking about the reasons why the zoo and enclosures were built the way they were and how DZG fits in with conservation efforts.

“I wouldn’t hesitate a moment to recommend anyone a visit to Dudley Zoological Gardens for an enduring memory.”

Previous: Herbs, spice and all things nice!
Next: Grotto countdown!