DZG is celebrating the birth of two baby bats  just a day before the grand opening of their Castle Creatures home by bat experts. 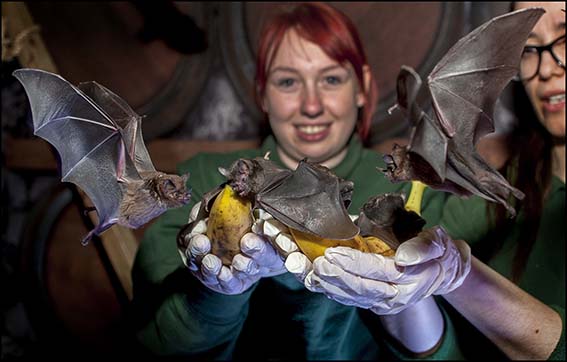 Senior Keeper Laura Robbins, pictured in the centre above, found the first baby Egyptian fruit bat just under a week ago and a second little one was spotted by Trainee Keeper Cara Sheldon in the last couple of days.

Both keepers work in the interactive medieval experience, Castle Creatures, and said the tiny pups were being well cared for by the two new mums. 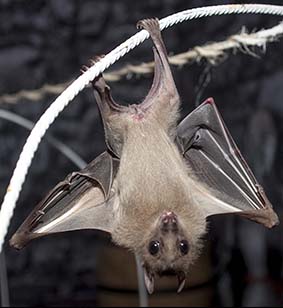 Cara said: “The mothers are looking after their babies very well and are keeping them tucked in tight under their wings.

“We’ve seen the youngsters suckling and the mums cleaning them and being really attentive.

“It’s so exciting, especially as all this has happened just ahead of the official opening of Castle Creatures. These little ones couldn’t have timed it better!”

The grand opening of the £250,000 exhibit – featuring bats and other live animals in the 11th century Castle  kicks off at 12 noon tomorrow when national and local bat conservationists will perform the ribbon-cutting ceremony.

Then Zoo Director Derek Grove will present members of BrumBats – also known as the Birmingham and Black Country Bat Group – with a £500 donation to support their volunteer work in bat conservation. 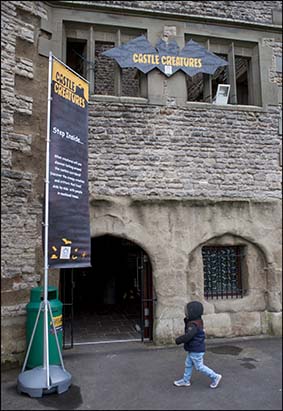 Derek said: “We’re really looking forward to tomorrow’s opening event, which we see as a the start of a collaboration between the zoo and a local conservation organisation.

“To have baby bats born inside our innovative exhibit this week just adds to the excitement and makes the occasion even more special.”

At the opening there will be chance to learn more about BrumBats and youngsters can take part in bat craft activities.

There will also an appearance by Lou, DZG’s giant bat character, and a large bat-shaped cake will be shared out with zoo visitors at the Castle Creatures event.

Castle Creatures, which was supported by the European Regional Development Fund, tells the story of the Earl of Dudley’s family and explains the history of the Castle.

It features informative games and houses animal exhibits showing how medieval folk lived in close proximity with species, such as rats and bats.

GO BATTY WITH US!  JOIN US AT 12 NOON TOMORROW

Previous: Pots of fun!
Next: Foraging in a fig tree!