There’ll be lots of primate chatter on site today as we celebrate International Monkey Day. 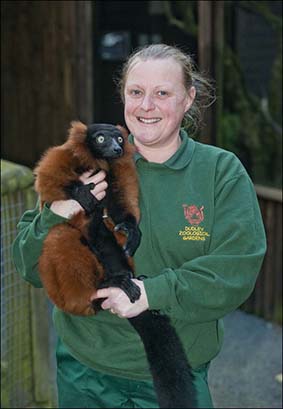 From great apes, such as Bornean orang utans and chimpanzees, to tiny pygmy marmosets DZG holds a wide variety of primate species, including some of the rarest animals on the planet.

Sulawesi crested macaques, black and white ruffed lemurs, yellow breasted capuchins and brown headed spider monkeys are all listed as being critically endangered in the wild on the International Union for the Conservation of Nature (IUCN) Red List of threatened species.

All four species have substantially declined in number over recent years, mainly due to the destruction of their natural habitats.

Their survival from extinction rests on captive breeding programmes like those being undertaken at DZG.

We are also proud to be at the centre of an international conservation programme for the black lemur as holders of the European Endangered Species Programme (EEP) annual studbook, which controls and guides the breeding programme for the threatened small primates. Data is collated annually by DZG Registrar and Research Co-ordinator Dr David Beeston and Senior Curator Derek Grove.

Find out who are our keepers’ favourite DZG primates  by watching the video below!

Previous: Thanks for panto tickets!
Next: Ten more sleeps!