We’re celebrating in true Aussie style this Australia Day by showcasing our animals native to Down Under. 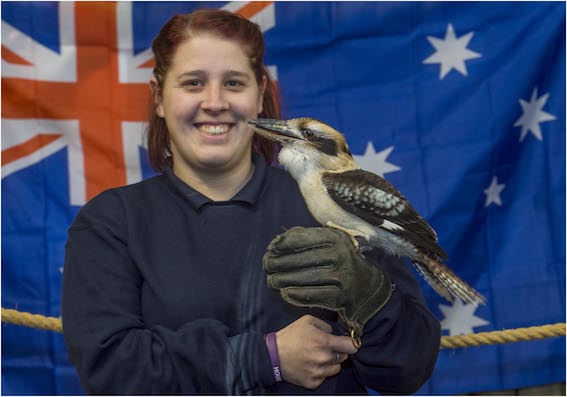 DZG is proud to house some of Australia’s unique and endearing wildlife and who better to begin our Antipodean trail than Adelaide  our Laughing Kookabura, who can be seen in the daily Go Wild! Show.

During the 20 minutes show, visitors can see how kookaburras can catch their food mid-air, as well demonstrating how they would tackle poisonous Australian snakes with the use of a rubber toy!

Presenter Heather John, pictured above with Adelaide, said: “Laughing kookaburras live in eucalyptus forests and woodlands and are the largest member of the kingfisher family.

“They get their name from their territorial laugh-like call, which is often heard at dawn.

“But we’ve got plenty of other Aussie animals on site, some of which you may not have thought were Australian, so why not try and hunt them all out the next time you’re on site.” 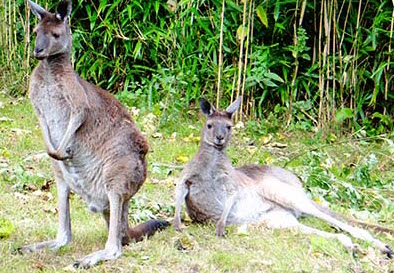 Our two male Western Grey kangaroos, Lou and Harold, are probably the most iconic Australian animal.

Western greys are a common sight across Australia and the males are much larger than females and can reach up to 225cm tall.

Hunt out Harold and Lou next to the tapir enclosure. 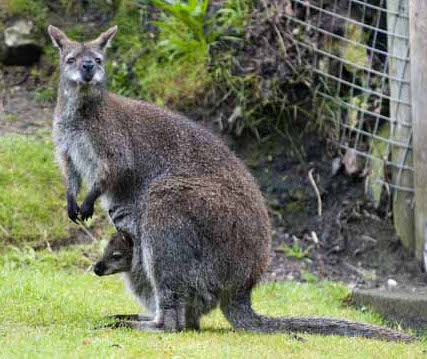 Find our parma wallabies adjacent to the mongoose.

Red necked wallabies are one of the largest species of wallaby and are sometimes mistaken for kangaroos.

They are distinguished from other species by their black nose and paws, white stripe on the upper lip, and grizzled medium grey coat with a reddish wash across the shoulders.

They live in dense patches of low undergrowth in the forest, but due to recent urbanisation, many wallabies can now be found feeding in rural and urban areas

Find them in our wallaby walkthrough and if you look very hard you may see a very new joey, who keepers have recently spotted poking his head out of his mum’s pouch. 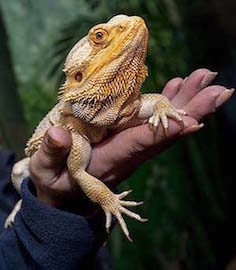 So called because the dragon can puff out its throat when it’s angry or excited which prompts a ‘beard’ of scales around its neck.

Spot our bearded dragons – Edmund, Percy, Bob and Baldrick  in the Discovery Centre. 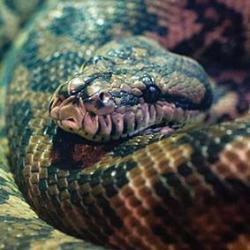 Carpet pythons can be found in a variety of habitats around Australia, ranging from tropical rainforests to arid and coastal regions. A non-venomous snake, they can reach lengths of up to 3.5metres.

See our python in the Reptile House.

The chestnut teal is a dabbling duck which inhabits coastal wetlands and estuaries. They form monogamous pairs which stay together outside of the breeding season. 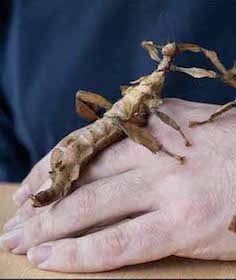