A baby boom looks set to continue with the birth of three more capybaras  the world’s largest rodent. 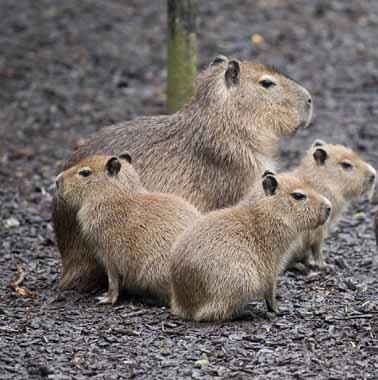 Curator Matt Lewis said the youngsters, who were independent from birth, have proved to be a big hit with members of the public.

He said: “They don’t really look like babies, just mini capybaras, but they are very cute.

“They weigh around 250grams each and were able to eat solids from birth, so they are nibbling at hay, vegetables and rodent concentrates, as well as having their mum’s milk.”

The youngsters are the offspring of dad, Pumpkin and mum, Peanut.

CAPTION: The young trio huddle round mum, Peanut, in the South American paddock.