It’s Bonfire Night and things are hotting up in the yellow-breasted capuchin enclosure, after keepers handed out chillies as enrichment! 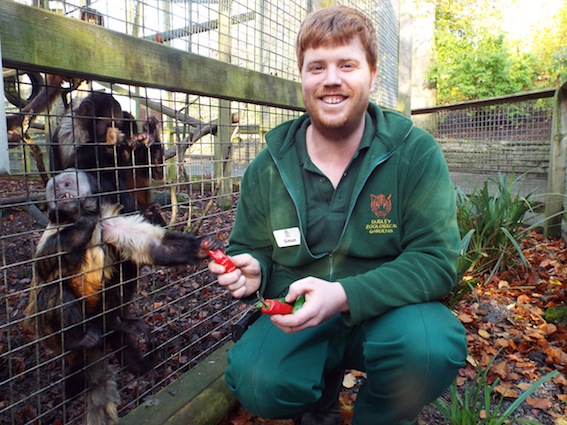 Males Willow, Spot, Dougal and Ted, and females Dinya and Holly use the hot veg as an insect repellent, which they rub over their bodies.

“We usually give them spring onions, which they use in exactly the same way, but I’ve used chillies before with primates at a previous zoo, so I suggested we give it a go here and they loved them, grabbing the chillies out of my hand before I’d even handed them over!”

The primates snap the chillies and rub the internal flesh all over their bodies, legs, back, tail and under their arms.

Simon added: “It’s all done very quickly, they don’t waste any time in getting it spread all over their bodies and it’s quite funny to watch.

“Not only is it used as an insect repellent, but as an antiseptic to improve any skin wounds, too Fur rubbing also helps reinforce social bonds in capuchin groups.

“Another great thing we’ve noticed is that seven-month-old, Ted, is now taking part in the ritual. When we gave them onions mum Dinya, was rubbing him over, but he’s obviously watched what they all do and copied them, so now he can do it all himself now, which is exactly what he should be doing.”

See the capuchins in action in the short video below…