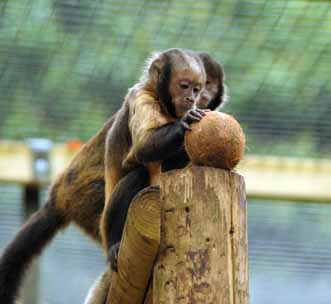 Our three yellow-breasted capuchins are among the rarest small primates in the world  a species notoriously good at solving puzzles.

And females Holly and Dinha and male, Willow, have perfected a quick trick to open coconuts so they can get to the goodies inside!

“We give them coconuts as enrichment treats  it would take other primates forever to work out how to open them to get to the milk and fruit inside  but capuchins simply hold the nuts in their hands and crack them open on a post. It’s a very quick and energetic process and it never fails.” 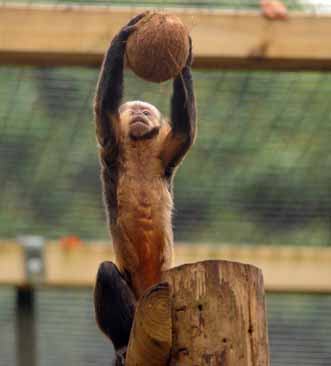 But the capuchins’ fast action has caused keepers a few headaches.

Pat added:?”When Willow arrived in the primate house he very soon worked out how to undo a sliding bolt which stopped him from going through to his outside enclosure, so we had to put a lock on the door instead.

“You certainly have to keep your eyes peeled when you’re near them; you’re never sure what they will get up to.”

Yellow-breasted capuchins are restricted to the very fragmented Atlantic rainforest in Brazil. They are mostly black and brown, but have golden yellow fur across their upper arms, chest and stomach.

The species is critically endangered, with as few as 300 in the wild, and at a very high risk of extinction.

Numbers have been slashed by 80 per cent in the past four decades, due to habitat loss and hunting by humans.

A new species to DZG four-year-old Willow, who transferred from Colchester Zoo, has been joined by eight-year-old Dinha, from Edinburgh Zoo and four-year-old Holly from Amersforrt Zoo in the Netherlands as part of a major conservation project through the European Endangered Species Programme (EEP).

Check out the capuchins’ antics on DZG?TV – visit www.dzgtv.co.uk  to see how quickly they crack the treats code!

CAPTIONS: Yellow-breasted capuchins use their skills to crack open coconuts to get to the treats inside.

Previous: Three little bears move in
Next: Moths in spotlight