A prickly gift is going down well in our Reptile House. 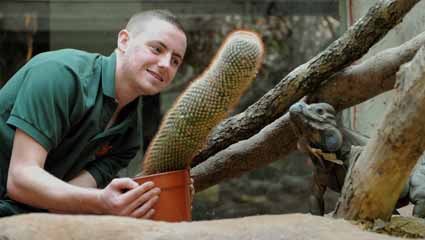 Cacti plants donated by Paul Jones, of Lister Road, Dudley, are being used to enhance habitats for a range of non-venomous snakes, lizards and crocodiles.

Paul, aged 58, said:?”A friend’s father left some cacti that were 60 years old when he died, but no-one in the family wanted to keep them, so I said I knew a place where they would be useful and offered them to DZG.”

Curator, Matt Lewis, said: “We’d like to say thank you to Mr Jones for the donated plants which are on display among the reptiles.”

* Members of the Development Team are currently modifying the drainage system and carrying out insulation work to the Reptile House which was opened by conservationist, Sir Peter Scott, on May 20, 1956.

Matt added: “The revamp is an ongoing project which will also see us renewing individual enclosures to replicate the reptiles’ natural environments as closely as possible and extending land areas, too.”

CAPTION: Trainee keeper, Sam Grove, places one of the cactus plants in the Reptile House.