Black and white ruffed lemur, Aramis, has left DZG in preparation for fatherhood in Kent!

The cheeky lemur, who is well-known for his mischievous and light-fingered antics in Lemur Wood, has left the boys behind and headed to Howletts Wild Animal Park where he will be paired with a female who is patiently awaiting his arrival! 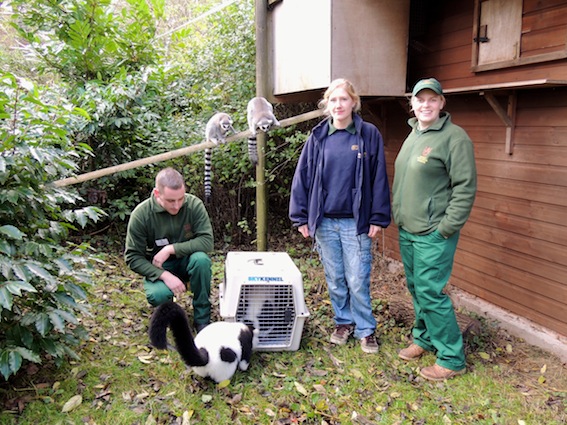 Upper Primates Senior Keeper, Sophie Dugmore, pictured above, right, with Howletts keeper Jennie Chambler and DZG’s Sam Grove, said: “It was sad to see Aramis go. He’s been at DZG for nine years and was one of our favourites boys in Lemur Wood, but he is off to do very important work in Kent as part of a European breeding programme for the endangered Madagascan species. I’m sure he’ll be a fantastic dad although he’ll definitely be missed by Yoda, his partner in crime!”

Caption: Yoda says a final farewell to Aramis, his partner in crime, through the door of the carry case!